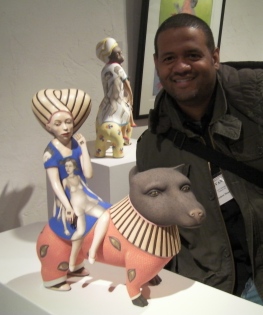 Me, next to Sergei Isupov’s piece at NCECA Seattle, 2012

I graduated from the Oregon College of Art and Craft with a BFA Craft with a concentration in Ceramics Arts, where I received the Student Scholarship Award for Outstanding Academic and Artistic Achievement; “Best in Show” at the Hoffman Gallery Juried Student Show; 3rd Place at The 2015 NCECA Undergraduate Award For Excellence & The Studio Potter Undergraduate Merit Award, Providence, RI and The 2014 Huntley-Tidwell Scholarship, attending Penland School of Craft, Asheville, NC. Another recognition was being included in an art book publication, 500 Figures in Clay, Vol. 2.

I’m currently a mentee at the Ash Street Project in Portland, OR.